I had some sweet potatoes left over from when I last made sweet potato chips, and I figured it was about time to use them. I decided to make sweet potato chips again, but to fry them this time. Here’s a recipe for some slightly BBQ-flavored fried sweet potato chips. You can also use regular potatoes, (I’d use yukon gold given the choice) but this is what I had to work with and they tasted great!

1. Prepare your seasoning mix while you heat the oil over medium-high heat to about 350 degrees.

2. Slice your sweet potatoes to desired chip thickness (if you have a mandolin or v-slicer that would be great too, but I just used a sharp kitchen knife.) You may peel them or not, just be sure to clean them well. 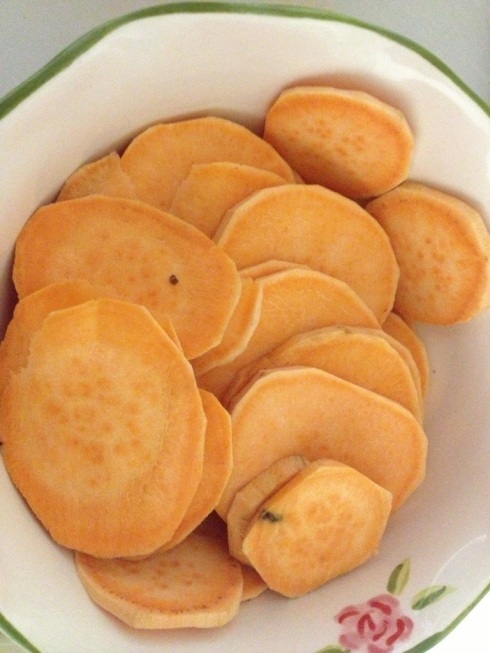 3. Add sweet potatoes to oil in batches (careful not to splash hot oil!) and cook about 3 minutes, stirring occasionally. When cooked, carefully remove (I used a slotted spoon) and drain on paper towel-lined plate. Repeat in batches until all are cooked! 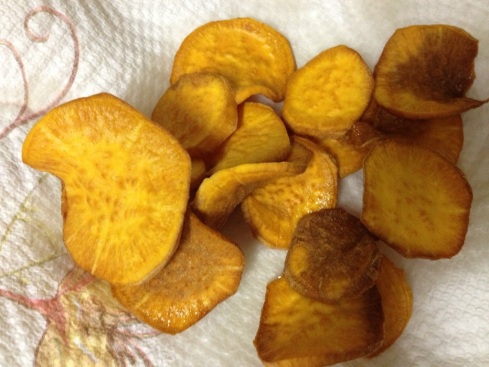 4. Add chips to bowl and toss with seasoning. Enjoy! 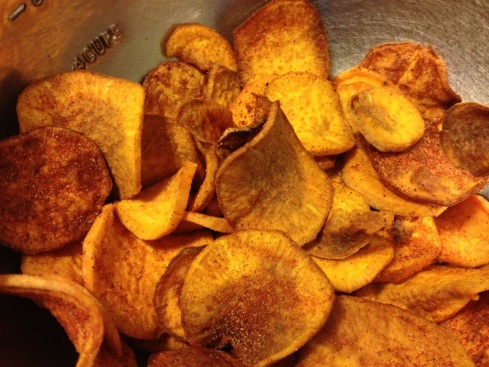 I’m always interested in healthier alternatives to snack food, so when I came across this recipe on Minamalist Baker (yet another food blog I’m addicted to now) I knew I wanted to try it.

I was pretty satisfied with how these turned out. Overall I think I should have added a bit more salt and baked adjusted the baking time and temperature a little so some wouldn’t be overly-brown. But they were crispy and delicious, despite the look. These also would’ve been easier to make if I had a sharper knife to chop with, or a mandolin slicer. I halved the recipe for my experiment, but will reproduce the original for you here.

2 large sweet potatoes
1-2 Tbsp olive oil
A pinch of salt (to taste)
(I also peppered mine, but don’t think it added much)

3. Place on baking sheet and sprinkle with salt or desired seasonings. Make sure they are not touching.

4. Bake for 1.5- 2 hours, flipping at least twice to ensure even cooking. I flipped these around 5 times because I get paranoid. I also took a few off the sheet earlier than others, because they were slightly smaller. Make your own judgments about your chips. Remove from sheet and cool on wire rack when golden brown and crisp.

5. Let cool, then enjoy! They’re a great snack and alternative to store-bought chips, and I would definitely make them again!